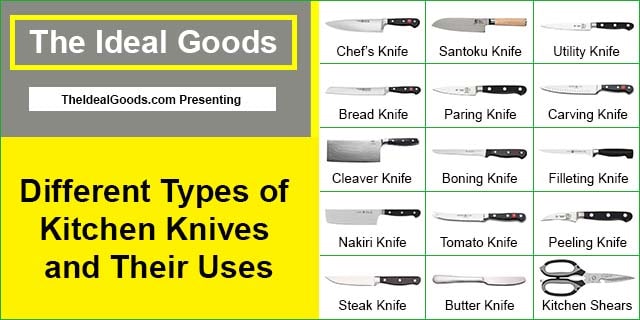 Looking for the right tools to become a master chef? Then look no further! With these 15 must-have knives, anyone could go from a cooking newbie to a master at the craft.

This is the most versatile and useful knife in the kitchen. Whether you desire to be a pastry, professional, or casual chef, this knife is a key tool in the kit.

At 8-10 inches long and normal weight, the knife is balanced so that almost anyone can use it. The bolster is curved, making it different from the santoku knife. The edge of the blade is also curved, which allows the user to slice ingredients using a rocking motion, known as the rock chop.

The Chef’s knife is the jack of all trades when it comes to knives. Whether it is fruits, vegetables, or some meats and poultry. However, this knife cannot handle bread or bigger, tougher meats.

This knife can be classified as the eastern hemisphere’s version of a Chef’s knife.
Santoku directly translates “three primary virtues”. This is because these knives can slice, dice, and mince ingredients. When these knives were first made in the 1940s, they were made using the same method that katanas (Japanese swords) were.

This knife has a smaller length than a chef’s knife, at 5-8 inches. Its blade is rectangular shaped, like a cleaver, and the edge is completely straight. This means that you can’t rock chop like you can with a Chef’s knife. Instead, you chop the ingredients with an up and down motion. There is also no bolster on the knife either.

Although the structure is different from a chef’s knife, it serves the same purpose. This knife cuts all types of ingredients, from fruits, vegetables, and some meats. Like the chef’s knife, it is not recommended for chopping tougher, larger meats or bread.

The utility knife is another important blade in the kitchen. It can be considered a smaller version of the chef’s knife because of its structure and uses.

Utility knives are 4-7 inches long, making them one of the smallest knives in the kitchen. It has a curved bolster, so you could rest your finger in there without it getting cut on the blade. The blade itself is thin and small, allowing you to maneuver the knife easily while slicing ingredients.

The utility knife can cut smaller ingredients that an all-purpose knife can’t slice efficiently. Foods such as celery, cherry tomatoes, and boiled eggs are too small for a big knife to slice well. However, the utility knife is light and small, making precision cuts easy to do.

This knife is not recommended for normal to big-sized ingredients. This is because the utility knife doesn’t have the weight or cutting power to slice through these foods.

The bread knife is most distinguishable by its serrated edge, something that almost no other knife has. This makes it so that it could cut bread and a couple of other ingredients very efficiently but struggles to slice most types of foods.

At 6-10 inches, these knives are normally sized. They may contain a curved bolster to rest your finger, but it depends on the manufacturer. The serrated edge is a feature that all bread knives share. It allows the knife to slice through the hard, crusty outside of a loaf without crushing the soft inside.

The main purpose of the bread knife is right in the name; to cut bread! However, it could also be used to slice a small variety of other foods. Fruits with hard outsides and soft insides such as melons and squashes can be sliced using a bread knife, although a Nakiri knife can do the trick as well.

The paring knife is the second smallest knife in the kitchen, second to only the tiny peeling knife. However, this tiny knife makes up for its size with usefulness.

The paring knife is normally 3.5 to 4 inches long (usually, the handle of the knife is bigger than the blade itself)! This means that although it has almost no cutting strength, the knife is light and maneuverable.

This knife is used to precisely slice very small vegetables and fruits that even a utility knife couldn’t handle properly. However, it is not recommended for ANY meat because of how small its slicing power is.

This is the first meat slicing knife on this list. Although it resembles a Chef’s knife, this knife specializes in meat.

This knife can be 8-14 inches, a large range of sizes for a knife. At the larger end of the scale, this makes it one of the biggest knives in the kitchen. This allows it to slice large meats without having to move around much. The spine is also a lot thinner than a Chef’s knife, which helps it slice through tough meats easier.

The carving knife can slice all kinds of meat but specializes in none. Surprisingly, it can also cut the cake due to how thin the knife is.

The cleaver knife is your stereotypical butcher’s knife. With its large, rectangular, heavy blade that chops through even the toughest meats, it has become synonymous with the butcher profession.

Although this knife is 6-12 inches long, you can find many that are over a foot long. When it comes to this knife, the larger and heavier it is, the better. It has a rectangular blade that covers a large area and can be compared to a much larger Santoku knife.

No meat stands a chance against the cleaver knife. The blade is heavy enough that when enough force is applied, it could cut through even the thickest meats and bones. However, its usefulness isn’t just limited to meat. If you don’t own a Nakiri knife, then the cleaver knife will also cut large vegetables. You could also use the broad side of a cleaver knife to crush the garlic.

The boning knife is used to take the meat off the bone. At 5-7 inches, it is slightly below average in terms of size. However, this works right in favor of the boning knife, as its small size lets it move through tricky carcasses with ease.

Although most of these knives are rigid, some of them are made to be flexible, allowing for more mobility as it moves through the meat.

The filleting knife is exclusively used to take the skin off fish. At 6-11 inches long, it has a wide range of sizes. However, even on the larger end of sizes, these knives are light enough to not crush the delicate fish under its weight.

What distinguishes this knife from many others, however, is its blade. Filleting knives are known to have flexible blades, which allow them to get around the contours of the fish.

This is the first knife on this list that specializes in cutting vegetables and fruits and is another knife that originated in Japan. Whether the vegetable is big, small, thin, or thick, the Nakiri will cut it with ease.

In many ways, this knife is like the Santoku knife. At 6-10 inches, it is only a little larger than its Japanese brethren and has a rectangular blade similar to the Santoku or cleaver knives. However, unlike the Santoku blade, the Nakiri knife has a thin blade. This allows it to easily slice through all kinds of vegetables.

The Nakiri’s main use is for slicing vegetables. You would use it in the same way you would use a Santoku knife. Since it doesn’t have a curved edge, you must chop the ingredients using an up and down motion, rather than rock chopping it.

These knives were specifically designed to slice tomatoes efficiently. The feature that separates this knife from the rest is its hooked point. This allows it to pick up the tomato slices after they have been cut.

Besides this forked point, the tomato knife is very similar to the bread knife. It has a serrated edge, which allows it to cut through the tough outside without crushing the fragile inside of the tomato. However, it is only 6-7 inches long, making it smaller than your normal bread knife. Fortunately for the knife, this makes it the perfect size for cutting tomatoes.

At 2-4 inches long, peeling knives are the smallest knives in the kitchen. However, the small size helps contribute to this knife in two ways: 1) the knife is extremely rigid and stable due to how small it is, and 2) its smallness allows the user to maneuver it with ease. The edge of the blade also curves inward, instead of something like a Chef’s knife, where the blade curves outward. This lets it peel the skin off ingredients without chipping away at the edible part of the food.

The only use for the peeling knife is to peel away the skin on fruits and vegetables. It is too small to slice anything, and the curved edge of the blade makes it almost impossible to cut through any ingredients.

This is a knife that I will call a “casual knife”. I call it this because almost all households own multiple of these knives, and they could be used at the dinner table.

It is 4-6 inches long, which makes it easy to use for any age. It has a serrated edge, and the point of the knife is very sharp. It is used to cut through cooked meat at the dinner table. However, don’t use this knife on raw meat. It is way too tough for this knife to cut.

These knives are around 6-7 inches long, and unlike any other knife, these are intentionally made to be blunt and soft. This is because they are made to scoop butter and place it softly on bread.

The soft nature of the knife allows it to get butter easily and spread it on soft foods without crushing them.

These are built like your average scissors, but bigger. At 7-10 inches long, it can be used to cut open any bag or package.

But it also has other, unconventional uses. For example, you can cut almost any kind of herbs and some types of poultry. Also, if you put nuts or lobster shells in between the handles, you could crack them open.

And there you have it! These are the 15 top knives that anyone could have in their kitchen. With these, you’ll have all the tools to become a master chef.